Fought the law and the law won

Here’s us in our upgrade! 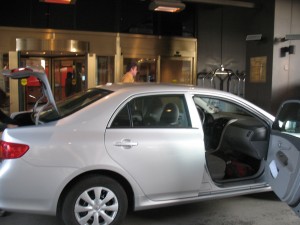 There were essentially two ginormous legs of the trip and a bunch of mini legs. This was one of the ginormous legs: Denver to Deadwood in less than a day.

Mary and Alceste had turned me on to the HBO series and so I just hadda go. I hadda! In between we would stop at Devil’s tower because Mary’s evil. She just is.

It was Sunday, opening day for my New England Patriots. I was bummed that I would miss all the twitter trash-talk and the game, but I was DVRing everything back home and assuming I would be in an information black hole, I wouldn’t even know the outcome, so it’d be just as if I was there live.

However, as I have been telling VinNay, if the Patriots are playing, I am sporting my Riots hoodie and a Patriots t-shirt*. Of course, we were driving through Colorado and Wyoming in this car with Texas plates, so coupled with my New England apparel, I changed my facebook status to “Dear sweet baby Jesus please don’t let us see sirens in the rearview mirror.”

I had wanted to have those amazing pancakes for breakfast again, now that I knew to skip the eggs, but, of course, Denver, always a step ahead, made sure the restaurant was closed.
Sonofa-
“Get me the hell out of this town before I start fitting in my clothes again!”

The TomTom was up and running, but just for kicks I fired up the Latitude app on the Droid X. Then I discovered the “streetview navigation” button.

Not only does it give speaking directions, it also shows you the actual road you are driving on! And when we switched lanes, the virtual representation of our car switched lanes too!

I missed the “welcome to Wyoming” sign, but Mary assures me there was one. I did not however, miss the huge billboard of two teenage girls which read “You and your best friend share everything. Now that includes the HIV virus.” What the What?! A few minutes after that I saw another billboard which read “He used to be your pumpkin. Now he’s your abuser” with a picture of an old lady with a black eye, publicizing Elder abuse! Good GRIEF, Wyoming? What the heck is going on here? Do you need a hug?

We drove for about five hours before we needed to feed the car and ourselves. I can’t believe I never did name the car. I used the yelp app to find a breakfast spot and then Latitude to get directions to it.

I kissed my phone A LOT.

Unfortunately, by the time we got to the breakfast place. (Haha I looked up my notes from the trip to find out the name of the restaurant. Instead, I found shoddy notations (made with the voice recording feature), all from Colorado, which said, in order 1. Our car is Canadian 2. Mary’s earring made a jump for it and 3. No cupcakes in Denver after 3! The hell?!) I should probably explain the Canadian car thing.
Anyway, by the time we got to breakfast, my phone battery icon was yellow and the reading said 30%.
Mary brought this bootleg, off-the-street car charger, but it didn’t work, and we had like 6 more hours on the road.

Sadly, we were in the middle of nowhere Wyoming. I tried to plug my phone into an outlet at the restaurant, but that didn’t work either.

My power was draining fast!

“Well, if you’d stop using it so much…” Mary said drinking the water the waitress had set on the table.

I googled “tap water in Wyoming.”

“Do not drink,” came result after result!

I’m not kidding. Look it up.

I started to freak as my power dipped to 20%.

“Geez. We just stay on this road till we see a big rock. Plus, we have the TomTom, it’s not a big deal. We clearly know who the woman on this trip is.”
#RUDE

Breakfast came, having learned my lesson from Denver, I ate my pancakes first. I was still working on a plan to revive my Droid, when a family came in and a little girl was wearing a familiar blue number 12 football jersey!

The game starts in thirty minutes! I have to find a charger and try out the Droid X NFL app.

I left Mary at the car and went in search of a charger selling store. I tried the supermarket first. Nope. Then the pharmacy next door.

Yahtzee. I found the electronics aisle, but they didn’t have a car charger with a mini USB port. I was going to cry. But the lovely salesman said if I bought an adapter with this other charger thing, I could make it work. $25 later, I was happily sitting in the car watching my battery inidicator light flash green. Huzzah. Mary, on the other hand, spent her time watching illegal drag racing on the side of the highway.

I pressed the NFL app and DUDE I could livestream ANY NFL game! Of course, there was only one I was interested in.

The Patriots were crushing the Bengals and I was cheering my head off and making out with my phone. Suddenly, I went flying into the dashboard.

“Sorry,” Mary said followed by a string of expletives at the huge truck which had just turned onto the highway in front of us.

“No worries,” I said returning to my game. Five minutes later I was sailing into the dash for a second time.

“FUCK. There’s a cop behind us,” Mary said slowing down. I looked in the passenger-side mirror and saw the white sedan with flashing lights. My heart started racing. Cops scare me. Wyoming cops? Oops I crapped my pants.

My friends had left hilarious comments on my facebook status hoping that we wouldn’t be pulled over. “Texas plates? You’re screwed. Texas just creamed Wyoming in a football game.” “Haha better say you’re from Rice!”

I didn’t say a word. Mary’s pretty white. She will save us.

She rolled down the window, the cop – a short, pudgy man wearing CHiPS shades, asked if we knew why he pulled us over.

“Okay. You all from Texas?”

Crap. Texas plates, New England jersey and now NEW YORK? We’re so dead. Could I get off one last tweet so people know where to search for our bodies…

“Okay, well, see that bridge back there, well I clocked you at 83. And we’re a 65 miles per zone here, so I’m going to need to see your license and registration.

“Well, it’s a rental car…” Mary said handing him her license and the paperwork from Budget.

“I’ll be right back,” he said taking the materials and waddling back to his car.

“I don’t think I was going that fast,” Mary said to me.

“Yeah, and we just stopped short because of that truck,” I said watching the pudgy man through my mirror, “maybe he was following us for a while.”

“But I didn’t see anyone behind us.”

The cop waddled back over. Balls. He had a ticket in his hand. He handed Mary back her license and our rental car papers.

“Okay, well I did have to give you a ticket. But because you’re wearing a seatbelt, I took ten dollars off. Here’s the envelope and you can just send that back in.”

Mary took the materials, thanked him and we were on our way. We sat in silence for a while, until I started pointing at things and asking if they were the Devil’s Tower.

Of course, when it finally appeared in the distance, I was too busy writing an “In your face” tweet to the blowhard Chad Ochocinco after the Patriots win was final.

We pulled over to take pictures. It was brutally hot and I had to take off some of my Denver layers. We snapped some shots: Of course, we were still an hour away from it, so we should have just stayed in the car and kept driving till we got there and could take this shot: Mary did the hike around Devil’s rock, I started the hike with her, but as I got closer to the rock, I realized I could easily climb it and meet her down at the other end. So, that’s what I did. And then, after, I made this video:

I’m not even out of breath! Mary’s such a wuss.

I twitpicked the whole thing and texted pictures of my triumph right from the base of Devil’s Tower. Can I tell you how much I love Verizon? Mary had to send postcards of the whole thing the next day using snail mail! Suck on that, Sprint.

After the Devil thing, we headed to Deadwood, where I bet Mary that at least four people would say she looked like Annie Duke at the poker table. I guess she didn’t relish this prospect so we didn’t even play any poker when we got there. 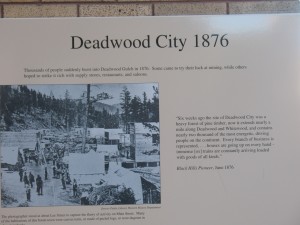 Deadwood wasn’t at all what I was expecting, though it didn’t exactly disappoint. I thought it would be a town frozen in time, instead it was a modern town with old timey storefronts…sorta. 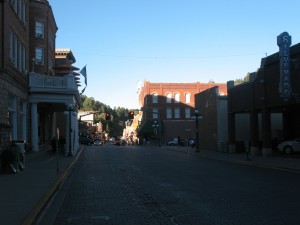 Also they charged me $3 for a 12 oz bottle of water. And gave Mary a cone the size of her head. (Not pictured.)

But it satisfied my TV show stuff jones with this: 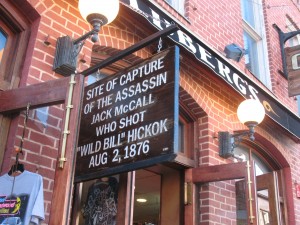 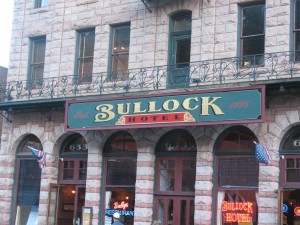 I went inside a casino, the Four Aces, I think, but they didn’t have any live poker and it was very smoky, so I left. It was onward to our hotel, which contrary to my belief, was actually more than an hour away. I really do not have a sense of how far or close things are!

Mary and I found our South Dakota hotel online for like $30 a night. I assumed we would be murdered in our sleep. However, it turned out to be my favorite non-casino hotel of the trip! And the only thing that was killed, was a piece of one of my braids.

* (I’m going to Buffalo to watch the Bills dash the hopes of the Jets fans, Vinnay, our host, texted me the following dire warning: I’m not kidding. Do NOT wear a Patriots jersey. Don’t even bring a Patriots jersey. This city hates the Pats so much your car will be keyed, your headlights busted AND you will be punched in the face on sight. And I don’t even KNOW what the other people in Buffalo will do to you.”)

29 Responses to Fought the law and the law won