Give me cupcake, or give me death, Denver

Bright and early the next morning, Mary and I were up and at them! By 8 am, we were out the door and ready to take Denver by storm. We stepped out into the crisp (read: damn hell ass cold) Denver morning and discovered… Nada. Zip. Zilch. The only people up and about were the Mexican busboys on their way to work, and the homeless people at the train station who shushed us when I continued to express my incredulity in a vocal manner.

“What the hell is this? I thought the midwest was industrious! I’m TELLING!”
(The midwest is NOT industrious. There. How do you like me now, Midwest?)
We wandered around the deserted streets of Denver for five minutes before deciding to “Go-go gadget smartphone.”

We yelped a spot about six blocks away and trudged over there hoping it would be open. It was.

They were playing disco music and had plain tables and chairs scattered throughout the inside. The counter was formica and the stools were maybe four feet tall and covered in red plastic.

Mary and I took a table against the wall.

The waitress said she’d be right with us, as she plunked down two brown plastic glasses of water. Mary took a swallow. I googled “tap water in Denver.”

Mary ordered the pancake and eggs special. I got black coffee and an omelet. But my omelet came with pancakes, so essentially, we both got the same thing. We still didn’t have a “Denver plan,” so Mary suggested we go to the tourism board after breakfast. I suggested a nap, since, dollars to donuts, the tourism board in lazy ass Denver would be closed. Mary agreed.

“These pancakes are good,” she said finishing another bite. They didn’t look particularly good, so I skipped mine in favor of the omelet, but I’ve never heard Mary praise a pancake before, so I tried it.

These were the best pancakes in the world, but now I’ve eaten too much omelet to finish them! Arrghh, why didn’t they look more fluffy and golden brown? I would find out the answer to this question later.

We finished breakfast, took a nap and tried out Denver at 11.

There were more people about, but still not a lot. Our tourism board guy was very nice, but seemed a tad lonely. In response to what we could do in Denver in less than 24 hours he wistfully replied:
“Ahhh, you could head to the gourmet food shoppe (I assume he said shop with the extra p and e based on the look in his eye.) and buy a baguette and soft cheeses, paired with a crisp spring wine and have a lovely picnic on the riverbank. Afterward, you can take a glorious walk down the promenade and stop by the spices store. You don’t have to buy anything because you are young and poor, but breathe in deep. Fill your lungs with the promise and happiness of the future, before life snatches your youth from your throat and your wife leaves you for that jackass Paul and his red camaro and the market collapses taking your entire retirement savings and forcing you to work at the tourism board on a goddamn Saturday morning.”

Mary and I stared at him.

“Or you can visit the Molly Brown museum and take a trolley ride pass Invesco field, people seem to enjoy that.”

We thanked him and slowly backed out into the street. When we had told him we were from New York, he started telling us that other visitors had invited him to come stay with them in their home cities. We smiled, nodded and kept walking.

We headed to the Molly Brown museum via a free trolley thing that traverses up and down the center of Denver. It let us off by the capitol building. I suppose this is as close as I’ll get to an iconic Denver shot so here’s me standing a mile above sea level and pointing to it.

You’re welcome. (There is a fancy courthouse in Denver, but (surprise, surprise) it’s closed on weekends.)

We weren’t sure which way to walk to the Molly Brown museum, so I yelped the address and used my phone’s walking directions feature! We were walking for a while when Mary started to wonder if we were on the right track. Well, walking directions is only in the “Beta” stage…perhaps it just always leads you to the nearest Verizon store where you will be greeted by a salesman who says “Hello, I see you have been enjoying the Beta latitude application….for $29.99 you can purchase the full product which will actually get you to the Molly Brown musuem!”

And then I would punch him and end up getting that tour of the Denver courthouse, after all!

Mary reasoned that perhaps I had my phone on the “exercise setting,” because the walking directions did seem to build a lap around the block before finally directing you to the building you were looking for. By the end of the day, I had to agree this was probably true. BUT I blamed Denver and its stupid health consciousness. It probably activates the exercise mode on all phones entering the city limits.

We finally got to the house and our guide came out: Okay, and here I SWEAR DOUBLE QUADRUPLE PINKY SWEAR I DIDN’T EVEN DO ANYTHING and this lady looks at me and goes:

“There will be no tweeting inside Margaret Brown’s house.” (Oh, so apparently, even though everyone calls her “The Unsinkable Molly Brown,” her real name was Margaret and no one ever called her Molly during her life, so our guide was all “and therefore, I shall not call her such either. She is Maaarrrrggaaarreeettt or Missseesssss Broooowwwwwwwnnnnn.”)

Mary starts laughing and I’m all incensed! IN. CENSED!

The tour was interesting, Margaret moved to Colorado with the goal of marrying a rich miner. She met a poor miner and was all “nah, close…but no.”

He was all “c’mon!” She’s all “ugh. Fine. Better you better become rich.” And he did. And they were the richest family in Colorado after hitting a gold strike. But they were 30 years apart in age, and she wanted to be all women’s libby. Mr. Brown put up with it for a while, then was like “look woman, stay your ass at home.” And she was all “nah.” So they got separated, but she kept the house.

Then, as you likely know, she ended up being one of the survivors of the Titanic crash (ergo “unsinkable.”) The story told was that all the women were on the lifeboats with one of the crew and the crew was like “oh, it’s hopeless, utterly utterly hopeless. Even though we’re on the boat, it’s filled with a bunch of women and we’ll never be able to row away from the vortex the sinking ship will create.” So MARRRGGAARREETTT was all “nuts to that! Roll up your sleeves, girls AND ROW!” And they did. After the accident, Mrs. Brown became an advocate for safety instructions in public transportation, so now whenever you’re on a plane and they tell you about seatbelts and whatnot, tis Mrs. Brown you have to thank for that. Again, you’re welcome.

After that we went to a fancy museum for hoity toity stuff like textiles and modern paintings… we weren’t allowed to touch anything.

But I liked this: And Mary liked this: Then we went to a library… I think it was a fancy library cause the people were all dressed like this: Finally, I was tired of all the unnecessary walking and so we headed out to look for this trolley tour thing. We got on the free public transport and rode it for 30 minutes. Then we walked like 2 hours across this bridge: See that handicapped dude on the reclining bicycle? So, I was exhausted and wheezing and sweating and he’s lapping me! AND LAUGHING! #RUDE

Finally, we get to the trolley (after going into a parking lot and crossing a highway and a bike lane), but we’ve missed it and we have to wait for the next one. There are no benches, so we stand. AND STAND AND STAND. And Mary’s all “this town is so fit! Everyone is really active.) Sure enough, as I was slumped across a rock, dying, there were families on bikes, toddlers climbing rocks, babies lifting weights…fucking Denver.

We get on the trolley and I am just ready to stretch out on the bench and go to sleep. Which I totally would have, but as we passed Invesco field, the trolley conductor is all “And here is where all your football teams come to lose to the Denver Broncos.” And Mary laughs and goes “have the Patriots played here?”
And I say “Yeah, last year.”
So she goes “Did they win?”
I punch her in the stomach.
“So, he’s right then!” My phone sent us on this wild goose chase for an hour before we finally settled on this bar. A friend of Pretty Numbers had told us about this great ice cream place, so I skipped dessert hoping to get the ice cream. When we looked up the ice cream address place, it was about two miles off the public transportation tracks, so we had no way of getting there. Fine, I said, I’ll get a cupcake. I yelped “cupcakes” on my phone and found about 5 bakeries near the hotel.

Open Mon-Fri said the first
Open 7 days a week 9-3 said the second.
Closed Saturdays said the third
WHAT THE %$$#????

I checked the last two, they were also both closed.

I started to go into sugar shock. (That’s what they call it when you’ve been walking around all day and haven’t had ice cream or cupcakes, right?)

At 9 pm we went outside looking for cupcakes. Um…I mean food. EVERY. SINGLE. DESSERT PLACE WAS CLOSED.

And they were parading this dude around just taunting us: 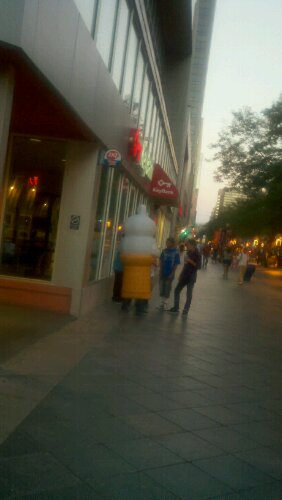 Like hahaha you can’t get any ice cream nanananana. And then it hit me: this is how Denver stays so fit! They make delicious pancakes *look* terrible, so you eat your eggs instead, they force your smartphones to make you take the long route everywhere, they hide the ice cream shops off the main public transportation line, they close down all the cupcake bakeries after three and then, when you can’t take it anymore they make you chase a guy in an ice cream cone suit down the street asking for just one little taste!

I started to hallucinate a whole fatty foods underground where a guy in a trenchcoat would see my sad face pressed against the closed bakery window and tap me on the shoulder.
“Pssst,” he’d say, “Is this what you’re looking for?” And he’d open his coat to reveal a panoply of cupcakes and donuts and pies and danishes! This, however, did not happen.

We ended up getting Chinese food. Actually, really incredible Chinese food — super delicious. I had a prosecco to drown my sorrows, but when we got back to the hotel room, I packed up my suitcase and my justice bag and sat on the edge of my bed till the sun rose. I would get out of the hellish healthfood town at first light!

I poop on you, Denver: This entry was posted in Travel. Bookmark the permalink.

18 Responses to Give me cupcake, or give me death, Denver