The next morning we were up super early because we had to take public transportation AND we already had our arch tickets, so we couldn’t miss our target time. We yelped for breakfast suggestions, but ended up eating at the place next door. The people at the table next to us were (if I had to guess) a mom and grandma and the cutest little apple faced toddler you ever did see. She was also wearing pink sneakers AND, for some reason, she found Mary and I, FASCINATING.

Her adults kept apologizing whenever she would come over.

“We’re sorry. We know you want to have your conversation in peace!”

“Nah, I’ve been stuck with her for eight days. We’d both much rather talk to her. Plus, look how fashionable she is!”

Unfortunately, yelp’s breakfast recommendation was in the exact opposite direction from the subway, so we had to walk a billion miles back and missed a train. OH and did you know that the St. Louis subway system runs on the HONOR SYSTEM? Dude.

Can I tell you how mad I was that I found this out after I paid? Er…not that I’m not honorable…cause…um…hey, look over there!

I didn’t realize the arch was as new as it was. It was dedicated in 1963. It was designed by the guy responsible for JFK AND the two ugliest colleges at Yale University, Morse and Ezra Stiles (thank you Wikipedia), yet, I actually like the arch. It’s simple and elegant and perfectly captures the idea of St. Louis as the gateway to the West. Apparently, in the 60s, you had to climb stairs to get to the top, but then they realized that Americans are lazy and voila: 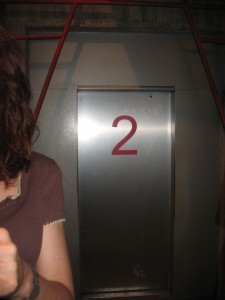 Of course, this elevator must have been constructed before the KFC double down sandwich was perfected. They now cram five adults into this pod which is so small, I couldn’t take a picture inside for fear of knocking my elbow into someone’s head. Someone like this guy: Here’s what St. Louis looks like from the top o’ the arch Guvner: (Who’s got two thumbs and left St. Louis with a *British* accent? This Guy!)

Next stop was that green oval shape in the picture: The Dred Scott courthouse which issued the decision that neither a slave’s presence in free territory nor the birth of a slave’s child in free territory would result in freedom for said party. That decision is often listed as one of the many forces which pushed the nation into civil war.

St. Louis has turned the courthouse into a de facto museum of other St. Louis-y things, though they do allow visitors to walk through the Dred Scott courthouses. (It was interesting revisiting the issue of Dred Scott and the 14 amendment which overturned parts of that case by granting citizenship, and the rights thereof,, to anyone born in the United States, especially in light of recent debates about “Anchor babies.” Just goes to show that everything ignorant is new again.) Oh, wait! Before the courthouse, we went on that cruise down the Mississippi! 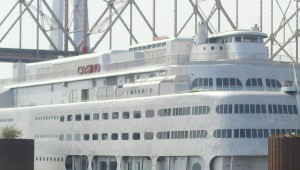 It was cool. That river is FILTHY, though!

Once again, the public relations machine of “the West,” defeats the one in the East. The Hudson has the reputation of polluted swill river, but the Mississippi roams free and clear! It’s probably because they used to have duels on its riverbanks…the Hudson needs to arm itself!

We floated by the riverboat casino and the Anheuser Busch factory. The captain told us that the factory keeps those horses from the commercial on the premises for guests to pet. But even the presence of animals was not enough to entice Mary into doing the beer tour. She’s probably spoiled from all the robot ponies she got as a kid.

On the way back to the subway thing, we walked by the Cards stadium. How come everybody gets a World Series win when they get a new stadium except the Mets?! #RUDE We had a night of poker with Chilly planned, so we hit one more tourist spot before heading back to the hotel. The acclaimed St. Louis Science Center! Unfortunately, as has been the theme of my St. Louis report, a number of exhibits were already closed by 3! But I got to ride a segway and watch the dinosaurs play: 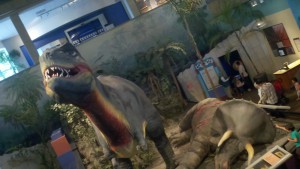 After the science musuem, I went in search of cupcakes!

I followed this sign into a back alley. As I did so, I tweeted that I always had a suspicion that this was how the Stephane story would end. My life tragically cut short following an arrow pointing to cupcakes. 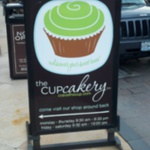 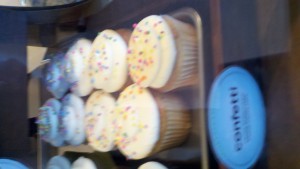 These cupcakes were as big as my head!

I was actually disappointed because usually oversized cupcakes taste like cardboard. But these cupcakes were moist and deee-licious! Er… I mean “cupcake.”

I definitely did NOT have more than one of the head sized cupcakes. *whistles*

When Chilly came to pick us up (not in the pickup, like he promised!) I told him that my friend said I had to go to Ted Drewes.

I got the smallest sized cookie dough freeze thing, but that was still as big as my face!

Oh, St. Louis, you wonderful magnificent bastard! No wonder you’re all tired and ready to go home by 4:30! Diabetes is exhausting!

I won’t bore you with the casino sadness, but by the next morning I was definitely ready to go home.

I packed all my bags.

Placed my dung covered Liberace sneakers in the trash, wept and headed to the car.

For some reason, we fixated on having breakfast at the Waffle House. For the first time, in nine days, the weather did not cooperate.

I guess we woke up late cause we were speeding through flooded streets and gulping down waffles and OJ at 9 am and our flight left at 10:30.

I was worried because I still had to check my bags.

I was right to worry. Delta at the St. Louis airport had the most retarded check-in system.

You check-in, then you form a line to check-in your bag, THEN you form a line to put your bag through the x-ray for boarding. On top of all that, I then got profiled for wearing my Patriots jersey and was flagged for extra screening.
(Or maybe the Iowa police called ahead to alert them… or the people whose car I tried to steal in the Badlands finally got an accurate description of me out to authorities. Oh…did I forget to tell the story of how, at about the halfway point through the Badlands driving tour, I took my obligatory photo, walked back to the lot and got into the first silver sedan I saw? Opened the door, sat down in the passenger seat, got my seatbelt halfway on… whoops…my bad…)

By the time I finally got to my gate, I only had five minutes to spare before the plane started boarding.

A dude waiting to board, noticed my jersey and said:

“That’s okay. They probably hate you too,” I said.

“You going to New York for the Patriots/Jets game?”