Meet me in St. Louis

I don’t care what anyone else says.

Second, thank God, I knew someone in the city before we booked our hotel. Without Chilly’s advice that we stay in Central West End, I have no idea where we would have ended up, but driving through St. Louis, the potential for “murdered in a dumpster” was high, very high indeed. And as St. Louis was the last stop on our whirlwind tour, I would have been so pissed to end up all murdered in a dumpster! (About a week after I got back from our trip, Jake texted asking what state I was in or if I “had been killed in St. Louis.” That place is NO joke.)

I don’t know what I was expecting, but as we drove by fast food joints and burnt out lots, I did a double take to make sure we hadn’t accidentally ended up in Detriot.

As F-train mentioned, St. Louis is the land of one of my most hated adversaries, one @Chilly43. No, don’t click on that. It’ll just encourage him.

Chilly gave us a lot of advice before the trip: buy our tickets for the arch online to guarantee our seats, take a boat ride down the Mississippi, go to the balloon festival, and, most importantly, stay in CWE. Actually, one of the funniest moments in our trip planning was when Grange realized that he and Chilly went to college together! He was all responding to one of my daily “very good and well thought out emails” about our trip, and ends his missive with “hey, are you the same Chilly that went to (fill in the blank college which totally bites its mascot off of Yale)?” Chilly responds “Yes!” And then they suspiciously took the conversation out of our mass emails. #RUDE

But at dinner, Grange filled us in. “Yeah, Chilly and I went to college together. He was okay. BUT HIS WIFE IS AMAZING! She’s a genius, four time volleyball Olympic gold medalist, Nobel peace winning doctor, who also rescued a bus full of blind kids from a fire.” Okay, I may be paraphrasing, but NOW I was fascinated. I’ve met Chilly, he is THE WORST! how is his wife so awesome? And then it hit me! Evidently, Chilly has found the secret to successful hypnosis and/or mind control and seriously, if I am to be married to Zac Efron by November 11, 2011 (Best anniversary date EVER.) I am going to need access to his mad scientist lab!

I emailed Chilly that Grange was a superfan of Mrs. Chilly and insisted that I get to meet her.

“No. I don’t let any of my friends meet my wife. They all want to switch and become her friends instead. No way.”

“Ah, but you forget: I totally hate you. I already like your wife waaaayyyyyy better than I like you. Meeting her will not change anything.”

I didn’t graduate at the top of law school class for nothing.

He asked what time we were leaving Kansas City. I said 10. He was all “awww, well then you probably won’t be able to meet her. We could do lunch, but it would have to be before 2 and there’s no way you’ll get here in time.”

Of course, I figured he’d say something like that, so I was like “HA! Actually we’re leaving Kansas City at 8! Suck on that. See you at lunch!”

Chilly gave me a bunch of options for lunch: Chinese, Thai, Pizza that President Obama says is the best pizza in the world and that he brought in the chefs to the White House to make the pizza there, burgers, Casual American…

I replied “The Obama One.”

I, like most people from Brooklyn, New York, am a pizza snob. I almost missed my flight out of Chicago six years ago because I had to stop and get a Chicago style pie from the very BEST Chicago pizzeria JUST SO I could taste it and say the pizza shop in East Flatbush tastes ten times better. I made that flight, with my pie in tow and when the dude next to me in business class said “oh, that smells good.”

I replied “Eh, the pizza from the guy on my block in East Flatbush tastes ten times better.” Then I put a line through that particular item on my bucket list.

But President Obama is also the second coming, so leave it to him to find greatest pizza in the world in…Saint Lou-iss? O-kay….

Mary made pretty good time right up until we hit the St. Louis city limits. I don’t know how St. Louis drivers have so successfully stayed under the radar, while New York and LA drivers take the brunt of public opinion, but these people are the worst drivers I have ever been terrified to be stuck on the road with! There was one yellow car attempting to weave in and out of bumper to bumper traffic…finally managing to squeeze in on the shoulder. Cars would stop for no reason whatsoever right in the middle of the street! Frightening! When we finally got to our designated exit to lunch, it was basically a detour through Detroit.

We found Chilly having a beer at the bar and he was like “yeah, I would have given you different instructions on how to get here.”

Uh huh. Suuurrreeee you would have! Wife hider!

(Everyone has seen this, right: ) (That’s not Chilly.)

We got a table at the pizza place right away. 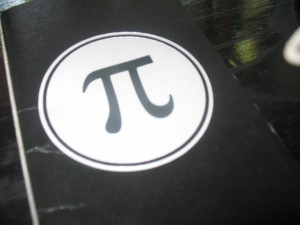 We got a waiter less right away. I saw a woman outside drinking a girly pinkish drink and I wanted one! I didn’t know what it was, so I was hoping the waiter would come take our drink order before she finished it. No such luck. I spent 30 minutes watching her slurp away all the evidence of deliciousness. By the time the stupid waiter came, she was down to the ice cubes. The waiter claimed he could tell it was a sangria, but the sangria he brought did not taste as delicious as her drink looked.

Chilly’s world famous wife joined us after we had ordered. She was totally super cool and way way way way better than Chilly! Way.

I told her that Chilly had more twitter accounts than anyone else in the whole world and she said
“Ohhh greeaaatt. This is why when I’m like ‘when are you going to finish the living room,’ you’re always so busy!”

“Oh, did you mean me? I thought you were talking to the cat!” (Chilly did NOT graduate at the top of his law school class.)

Chilly has also decided that his three children will be going to state school and they will be (in no particular order) an engineer, a doctor and a lawyer.

“But what happens when your daughter comes up to you and she’s all smiling and blinking her little eyes and says “daaaadddy I want to go to Sarah Lawrence to study art.”

“Well, then I will say, sweetie, if I were you, I would call dibs on engineer before one of your brothers takes it.”

We finished up lunch, the pizza was okay. But the President has clearly never been to Brooklyn.

I did my best to get Mrs. Chilly to come to Vegas, hopefully leaving Mr. Chilly at home. I don’t know if I succeeded, but she did totally get a Droid phone based on my raves!

After lunch we decided to head to the arch and do the boat tour thing, unfortunately, the one time we didn’t take Chilly’s advice and get our tickets ahead of time, we were out of luck. The arch shuttle was sold out by 3:30 (which is when we finally made our way through the dang metal detector line!) But that was fine because the arch also closes by 4:30. Which, by the way, is when EVERYTHING in St. Louis closes! Lazy, bad driving Francophiles! (I mean the ones in 2010, not the sophisticated, brilliant patriots whose votes I will depend on during my Presidency run in 2020.)

We stayed on line and bought early morning tickets for the next day. I didn’t just drive 7 days to St. Louis to NOT go up in the arch. We then wandered around the Arch “Westward museum” for a while. They have these crazy animatronic figures who give lectures:

I started to talk back to it, when I suddenly panicked that maybe it wasn’t a robot, but an actor in a costume who might get mad and hit me.

What? It *could* happen! You don’t know! They were real looking animatronics!

No, no, they really weren’t.

Oh, but I did pinpoint exactly where the Native Americans went wrong:

Afterward, we went to a fancy outdoor park:

I saw a statue of F-train:

Since everything was closed and we were full of pizza, we decided to just go back to the hotel for a nap. Chilly had warned us that the highways would be closed in the morning, so I asked the girl at the front desk how the St. Louis subway thing works. This…this…chick, says “Well, I’m not sure what you’re asking. I don’t have a manual or anything.”

Right. Because clearly I’m not asking about costs or schedules, I would like a manual and a physics lesson about force and momentum.

This is why anger management is a growth industry.

Around 7, Mary and I headed out to the balloon lighting festival in the park. We decided to walk since it was, ostensibly, “close” to the hotel. It was not “close” to the hotel. Well, it was “close,” to the extent that quotes around a word indicates walking FOREVER. But when we got there, it was a totally cool sight: 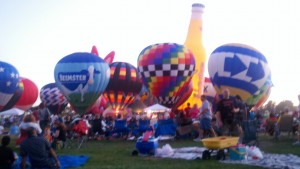 This was my favorite balloon: 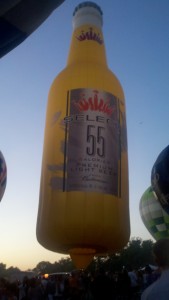 No, YOU have a drinking problem!

Actually, I became so preoccupied with getting the perfect shot of this, that I ended up losing Mary in the crowd. You cannot begin to imagine how many women kinda look like Mary from the back. #Noporno

The sun set and the park became pitch black except for sporadic bursts of light and heat when they balloonists would fire up the…er… fire thingies that power up the balloons: 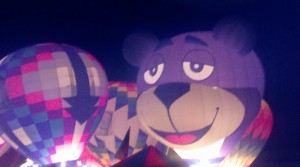 I did eventually find Mary again and we stayed to watch the fireworks end the balloon festival:

17 Responses to Meet me in St. Louis