Okay, let me ask you a question.

You have an airport organized by a system of color coded squares. You use the primary colors, Roy G. Biv. The B in Biv stands for blue.

Now, one of the airlines which uses your primary colors coded airport is called Jetblue. I ask you, for the love of all that is holy and unholy why would Jetblue NOT be located in the damn hell ass BLUE terminal???? Whhhyyyyyyyyyyyyyy?

But what do I get for my flawless logic and airtight reasoning? Punished. Like all the great scientists before me: Copernicus, Darwin, Dr. Atkins, Clare. Relegated to parking in the wrong terminal and walking a mile and a half in the freezing night to collect VinNay from his, APPARENTLY, JetOrange flight from Buffalo.

“I don’t want to hear it. It’s not my fault that I’m smarter than JFK airport.”

We were meeting Peter and Petitedov for pizza at DiFara’s, so the added on cardio workout was not the best.

Also, I was obligated to do my “lost at JFK loop around the airport.” Thankfully, I only had to do it once. Down from the all time high of four times.

Shut up. I am too still smarter than JFK.

Unfortunately, we hit an insane amount of traffic. However, back in Brooklyn, Petitedov and the Cider Fraud were somehow first in line at an empty DiFara’s! It was a recipe for multiple “where are you” calls from Pdov on behalf of a hungry hungry Peter.

We were originally supposed to meet them at the pizza shop, but switched to meeting at my apartment.
When we finally got there, Pdov informed me that 1) Peter was no longer my number 1 fan and 2) Now I definitely wasn’t getting any homemade cider.
I laughed.

“Peter has never ranked higher than my number 253rd fan and his cider making is fictional!”
They went Plan B.
“Fine. No DiFara’s pizza for you.”
Nooooooo. I’m sorry. Totally super duper sorry. It’s JFK’s fault!
“Okay. You can have a slice. No. Half a slice.”
Mean.
We ate, I tried a few bottles of Riesling. There was one that was terrible. I felt bad throwing it away, but quickly discovered “come on, help me finish this horrible bottle of wine,” is not quite as persuasive as it sounded in my head.
Down the sink it went.

I decided to introduce Pdov and Cider Fraud to the game of jungle speed.
Americans need to start training if we are to have any hope of defeating the Astin-led Canadian jungle speed squad at the 2012 Olympics.

Object of the game is to get rid of all your cards. There’s a totem that people fight over…this is where injuries happen. Scratches, broken wrists, concussions, you know, the usual.

I jumped out to an insurmountable lead in the first game. I stayed away from unnecessary confrontations and got rid of all my cards first. All I had to do was not make a mistake and touch that stupid totem.

All I had to do was do nothing.

Countess Spazz von Grabbyhands just had to touch it. I ended up with a palm full of new cards. And VinNay cruised to the first of six consecutive victories. Gross. After a while, he wasn’t even paying attention cause the Sabres were playing the Leafs in hockey and he was watching the game. HE STILL BEAT US.

Finally, we decided to all just gang up on him. This was a successful strategy. He lost the last four games, but the Sabres beat the Leafs AND we got to internationally trash talk Astin, so he was happy.

After the Cider Fraud and Pdov left, VinNay and I ended up playing a series of dealer’s choice heads up poker games. Starting with the most popular, hold ’em iteration, and then after six straight losses, he resorted to picking the esoteric retarded games like Razz. I still won. Then he tried to pick Jungle Speed again. No.

The next morning, we drove out to Jersey to have the hands down best pancakes on the Eastern seaboard. We get there, there’s a bit of a wait, but not too bad. We get the pancakes and they are awesome.

VinNay tries to pancake tilt me by claiming he’s had better pancakes, though he can’t think of where.

So la la la we’re approaching the end of breakfast, I leave to go to the bathroom. There I am, in the stall and the toilet explodes. I am quick enough to escape, but my pants are soaked AND the floor is quickly being covered in water.

Now, I am a recovering germaphobe, but NO WAY IN HELL, am I THAT recovered. So I bolt out of there, trying to take the wet pants off. As I am hopping around with one foot in and one foot out, this mom walks in with her two girls. The littlest one, who is adorably clothed in a Mets baby onesie is staring at me with wide eyes. Her mom, looks horrified at…well, at any number of things… the pantsless black lady, the flooding bathroom…New Jersey…

She quickly pushes the toddler into the other stall and pulls her other kid — horribly dressed in a Giants jersey — in behind them and shuts the door.

I wash off the pants and try to blow them dry. This was unsuccessful. Arggh. There was NO WAY IN HELL, I was wearing these pants in my car so….

I roll them up and do a walk of shame back to the booth.

I sit down and wait for the mocking laughter. Nothing.

All VinNay says is “should we get the check”?

As we walk out, VinNay runs into Zach Galifianakis waiting in the foyer. See? Told ya these were the best pancakes on the Eastern seaboard! That guy from that movie with Mike Tyson totally agrees.

I do not see him myself, as I am running my pantless self to my car as fast as I can, so I can toss the wet pants in the trunk and get into the car WITHOUT BEING SEEN BY ANYBODY!

This mission was successful! I was back in Brooklyn fully pantsed within the hour! And NO ONE noticed. I am that awesome.

Well, except for the non-awesome losing of my pants. Also, I’m not sure pantsed means what I think it means. Panted?

Anyhoo. I had a quick poker game at my place, Alceste won, took all of our money and then made us have a victory dinner with him at a Mexican joint in Whiteyville in Brooklyn. Stephane ordered a “small sangria.” Unfortunately, this turned out to be a “small pitcher of sangria.” However, you know how I feel about wasting good alcohol. Neither of the boys wanted to drink sangria, so I was on my own. Um…er…so…there might have been public dancing.

“Good thing, VinNay knows how to drive your car,” Alceste chimed in.

Thankfully, no amount of sangria can erode my amazing Scrabble powers. I trounced VinNay something like 1100 points to 280 points over two games. OH, so the best part of that? I asked him if he was good at building stuff and he said he was, so I asked him to put together this toy car I got for Sammy’s birthday. Then he was all “No, I don’t feel like it. I hate little black kids.” So I said “put together toy car or get murdered by me in Scrabble.”

He chose the murdering.

Ah, second best part? After being destroyed in the first game, he pretends that he doesn’t care about winning the second game, but then he plays this word “Ronin.” I ask if he means the movie with the car chase… you know, starring Robert De Niro. He goes “maaaayyyyybe.” So I challenge the word. He gets all happy because evidently, “ronin” appears in his nerdy sci-fi books meaning a warrior. But, turns out, it does NOT appear in the Scrabble dictionary. So, he’s sad again. I laugh.

OOH and third best part, I used all my letters to create a 9-letter-word bingo through two letters already on the board. 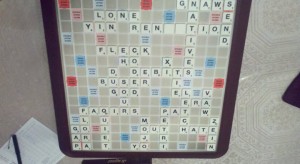 Even Fisch, who taught me how to play Scrabble, said he would never have found that play in a million years.

I took VinNay back to the airport. We left at 10:43 to catch a 12:00 flight AND HE MADE IT! All I know is that someone owes me a medal, a trophy and a plaque for getting him there in time. Also, on the way back, I got out of JFK without getting lost ONCE!

I am the master of all the world!