The Girl Who Played with Fire
This movie was crap. Which is too bad because I loved the book. I’m glad they are remaking these movies because these Swedish versions are terrible. The girl who plays Lisbeth is all wrong. And the actor who plays Mickey is too old and flabby. There is a graphic lesbian sex scene in this one for those who are interested in that sort of thing. (“There is nothing gay about lesbians.” – VinNay)

Hollywood Shuffle
I liked the message of this movie (i.e. that black actors should reject stereotypical roles in Hollywood films) but the fact that it employs those very stereotypical prototypes to make the point AND that most of the actors in it have gone on to be some of the most egregious offenders… well, I raise my eyebrow.

Special
This movie is weird. Gracie recommended it. It stars one of those actors you recognize but can’t name, as a guy who signs up for a drug trial and starts to experience supernatural powers. He’s dropped from the drug trial and then finds himself on the run from “The Man” who wants to make sure he never tells his story. That… or he’s a delusional nutcase.

Carolina
This is a campy feel good eighties type movie. Sassy straight shooting grandma is raising her ne’er do well son’s three daughters. But she’s tough and controlling and then one of the daughters wants to break free or something. And there’s a love story involved.

Across the Universe
This movie is not at all what I thought it was gonna be. I thought it was the story of how the Beatles were formed. It’s not. It’s about hippies in 1960s New York. And there’s singing and weird psychedelic special effects. I liked it though. But the last scene kept skipping on my DVD player, so I can’t tell you how it ends. But it’s one of those movies where you get the feeling that even if you saw the last scene it wouldn’t really make a difference. You know, like in The Usual Suspects.

The Good Guy
Oy. I don’t know what it is about the former stars of the WB, in this case Rory from Gilmore Girls, that causes them to star in these horrible horrible romantic comedies. This piece of crap is neither romantic nor comedic and the whole time you’re watching it, you wonder how Alexis Bledel sleeps at night knowing that she has subjected her fans to this.

You Don’t Know Jack
I thought I was pro euthanasia and so I thought this biopic of Dr. Kevorkian’s life would be interesting. Turns out…wrong on both counts. Al Pacino is so dreary (and yes, I know this dude is Dr. Death, but still. Kevorkian was hilarious on that Michael Moore TV show!) The story is poorly plotted AND ultimately turned me against his cause. Epic fail.

Shrek Forever After
I LOVED THIS MOVIE! I also loved the first Shrek, but hated the second Shrek and then wanted to murder people after the third Shrek, so I almost skipped the fourth Shrek altogether…but I’m so glad I didn’t! It was terrific and empowering, but sweet and hilarious! The villain is great, Fiona’s great, even donkey isn’t as annoying as usual! Definite rent! DEFINITE!

Youngblood
Drizz is officially no longer allowed to recommend movies to me. Or Hollywood is officially no longer allowed to make movies about hockey. I’m not sure which. Blech. Rob Lowe is young and cute though. But the story is so predictable and all the actors are horrible. Blech. Did I say blech? Cause blech. Oh…um it’s about a country kid who gets a shot to make it in the hockey big leagues, but he falls for the coach’s daughter instead. And then he quits, but then he realizes he’s not a quitter and goes back. Or something. BLECH.

I’m Gonna Git You Sucka
O_O I guess this movie was funny in parts, but it’s a satire of black buffoonery that just isn’t satiric enough, so it’s pretty much just black buffoonery. And as Townsend points out in Hollywood Shuffle, there are jobs at the post office. Well, actually, I don’t know. We’re still in a recession… are there jobs at the post office?

The Water Horse: Legend of the Deep
I thought this movie was FANTASTIC! It’s about a little boy who finds a water horse and tries to raise it in his bathtub. He’s a sad little boy because his father has gone to war and his mom is running a boarding house for soldiers. Turns out his father was killed, but his mom keeps lying to him about it, but he figures it out sorta. It’s cute. Triumphant!

Princess Kaiulani (2009)
This movie is AWFUL! DRECK! I rented it cause the previews make it look like Mulan – with the defiant Asian princess girl all fighting for her country, but THEN it turns out she’s fighting MY country! What?! But not even really fighting. And the accents are terrible and there are no good looking people anywhere. And then she dies of a broken heart and Bill Clinton apologizes to the people of Hawaii for what we did to them in the 19th century. Whoops. Did I just ruin it for everybody? YOU’RE WELCOME.

Midnight Run (1988)
BLECH. This movie sucked. I fell asleep four times. I hated everybody in this movie. EVERYBODY. None of it made sense and…ugh…I can’t remember who told me to rent it, but I want to fight them. It’s about a bounty hunter who has a week to transport a criminal from New York to California to get a 100K payday. But the feds are chasing him, and a drug lord and competing bounty hunters. Dumb dumb dumb.

Tetro (2009)
This is one of those Vincent Gallo arty black and white movies. I didn’t like it, but Vincent Gallo also reminds me of people I generally hate, so that may have colored my view of it. It’s kind of a weird film and you guess the “shocking surprise” ending about 15 minutes in, and then you spend the next 2 hours of the movie rolling your eyes. No bueno.

Wall Street: Money Never Sleeps (2010)
VOMITOUS. UGH. Would prefer oral surgery. It’s terrible. Run RUN AWAY. It has a promising opening 15 minutes and then it’s an avalanche of diarrhea down a mountain AND IT’S LIKE THREE HOURS LONG! RUN.

The Town [Blu-ray] (2010)
This movie got such great reviews I was excited to watch it. Even though I am no Ben Affleck fan. It was wretched. Okay, maybe not Wall Street: Money Never Sleeps bad, but bad enough. There are some exciting chase scenes, but the conclusion doesn’t make any sense. The plot doesn’t really make any sense. You never for one second believe anything any of the characters say or do. BLAH. And there are no zombie nuns, so double blah. #RUDE #MISLEADING

Salt [Unrated] [Blu-ray] [Deluxe Edition] (2010)
No lie, I loved this movie! Angelina KICKS SO MUCH ASS! See, unlike The Town, this movie is well written and acted, so as implausible as the plot may be, you believe it because the actors are great and it’s action packed and you are willing to suspend reason because you are having such a good time. And the movie doesn’t promise zombie nuns only to give you Ben Affleck doing an annoying Boston accent. #Stillbitter

The Winning Season (2009)
Feel good tale of a hapless girls basketball team and their alcoholic coach who persevere and end up having…wait for it… a winning season. Meh.

12 Men of Christmas (2009)
AWFUL AWFUL AWFUL. Please note: I LOVE KRISTIN CHENOWETH. LOVE. I watched that weird Pushing Daisies show because of her. I gave Glee a third chance because she was guest starring a lot. Saw her on Broadway, listen to her songs everyday on my Droid X. And yet. Every second she was on screen in this movie I wanted to shove something sharp into my face. Oh, it’s the romantic comedy of a big city girl moving to Montana. And there she finds the love of a mountain man. Something sharp. Real real sharp.

Shrek Forever After (2010)
Yeah, I rented this movie twice. And watched it like six times. Get it.

Disney’s A Christmas Carol (2009)
Blech. This movie is like animated, but not. Like that Polar Express movie. It’s not very good. I recommend you just reread the book. Or watch the Dr. Who episode with Dickens.

The Other Guys [Blu-ray] (2010)
WRETCHED. I swear, if I ever meet Marky Mark, I’m punching him in the face for this. Again, a promising first 20 minutes followed by sheer utter complete nonsense. I don’t even remember how this ends, or I would tell you and ruin it for you so you don’t make the mistake of renting it. They don’t die though, cause I feel that might’ve made me warm up to this movie a bit.

Despicable Me (2010)
THIS MOVIE WAS GRRREEEAAATTTT!! Oh my gosh! The kids are ADORABLE, Steve Carrell is PERFECT! The story is hilarious, but warm. Perfect PERFECT PERFECT! Even though the plot device makes little to no sense. But oh my gosh it’s so cute, you die.

This is one of those coming of age tales that Macauley Culkin and Anna Chumsky would have starred in if this were 1991. I dunno, it’s about a 8 year old girl who decides she loves her 8 year old boy next door neighbor, but he thinks she’s weird and runs away, but then when they’re 16, he realizes she is the only one for him. Yawn.

Amor, Dolor y Vica Versa (2008)
This movie is creepy and weird. But ultimately, I think good. I think. It’s weird and hard to explain. There are many dream sequences and the lines between reality and those dreams are blurred. I told you. Weird.

Elf [WS] (2003)
I think I was probably the last person on earth not to have seen this movie. It was great though! Very funny and sweet and YAY Christmas is saved. Whoops…eh, I didn’t ruin anything, everyone else has already seen it. Oh, who wants to see a picture? 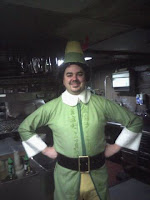 Inception [Blu-ray] (2010)
This was the first movie I saw on my new 100 inch home entertainment center. Needless to say, it scared the crap out of me and I was afraid to be alone in my living room for two weeks. This movie is totally like Shutter Island, but hey, I loved Shutter Island, so more power to Leo.

Going the Distance (2010)
So, you totally think this movie is gonna suck, but then… IT TOTALLY DOESN’T! Hooray! Drew Barrymore and Justin Long have real chemistry. Their relationship makes sense, it’s almost as good as that Boston Red Sox maniacal fan movie! Loved it. And the ending is perfectly unexpected.

The Twilight Saga: Eclipse (2010)
I dunno why I keep renting these movies. I find all the characters excruciatingly boring. This installment is no exception. Oh, but now she loves the werewolf boy too. So, there’s that. Some of the fight scenes were cool.

Eat Pray Love [Theatrical Version/Extended Cut] (2010)
This movie is pretty much as bad as you’d expect. Rich lady divorces her husband to have sex with a Spaniard in India. Or something, I dunno. It was boring, but the food looked good.

The Expendables (2010)
LOL. This movie is exactly as advertised. Things blow up. Girls are kissed hard on the mouth and things blow up.

The Disappearance of Alice Creed (2009)
DUDE! This movie is FANTASTIC. It’s a mystery suspense thriller with crazy twists. I was surprised at least twice! EXCELLENTLY acted and written and directed. Brava.

The White Ribbon (2009)
This is another arty black and white movie. I dunno. It’s about mysterious tragedies that happens in a small town shortly before World War I breaks out. I KNOW there was some message about the human existence that I was supposed to get…but…er… Also, it was in German.

This entry was posted in Movies. Bookmark the permalink.